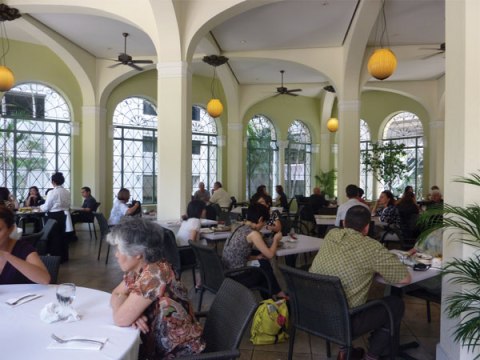 Every few years, the downtown YWCA’s café—for more than a decade known as Café Laniakea—gets a new chef, gets buzz, then goes off the radar (or closes altogether). All kinds of locally known names have helmed the kitchen—such as Town’s Ed Kenney (Wanda Adams announced his appointment in the Honolulu Advertiser in 2003, reporting that the café’s new motto was “Local first, organic whenever possible and with aloha always.” Sound familiar?), and soul food guru Sean Priester (he had the brunch pop-up Wild Mushroom there before the term “pop up” popped up in everyone’s mouths).

In May, after being closed since last fall, it reopened as Café Julia. The space has been a restaurant since the Y opened in 1927,  but this is the first time the Y has hired a company—Shinyou Group—to manage the operation. Shinyou’s veteran team—Bruce Watanabe (president of The Catering Connection—he’s made sure the food is just so at hundreds of fundraising events), Lance Kosaka (former Pineapple Room chef de cuisine) and Derek Watanabe (Bruce’s brother, and former chef de cuisine at Watabe Weddings)— got all its ducks lined up, overseeing renovations and the menu, to create a new breakfast and lunch spot worth putting on your regular roster. You get contemporary food in a genteel room with coffee shop service—a perfect mix for a world where CEOs wear aloha shirts.

Kosaka’s food melds cues from around the world with local flavors and produce—you’ll find everything from arancini (flecked with fried salmon and accompanied by umi aioli, pictured below) and spaghetti puttanesca to garlic chicken-and-furikake mac salad sandwich (!) and grilled beef marinated in a “Korean-inspired sauce.” And the place is packed with downtown biz lunchers—inside and outside at the umbrella-topped courtyard tables. On a visit in May, the “Vietnamese-inspired salad” (pictured below) was basically the bun with barbecued pork found at every Vietnamese joint, only smaller, and with spaghetti-size noodles instead of vermicelli. Pan-roasted Jidori chicken breast sits atop a Maui onion jus-and-cubed potato stewy mixture (called warm potato salad on the menu, pictured below).

The restaurant’s name comes from the building’s famed architect, Julia Morgan, who designed Hearst Castle (though it’s not the first time her name has graced the eatery—in the 1990s, it was a Mexican joint called Julia Morgan’s), and its recent refurbishment has left it one of the best rooms in the city. The soaring, quasi vaulted ceiling punctuated with retro ceiling fans create an another-era ambiance (er, it could also be read as hearkening back to more colonial, less multicultural times) done in a visually cool pale green and white. Feel like a princess for commoner prices.