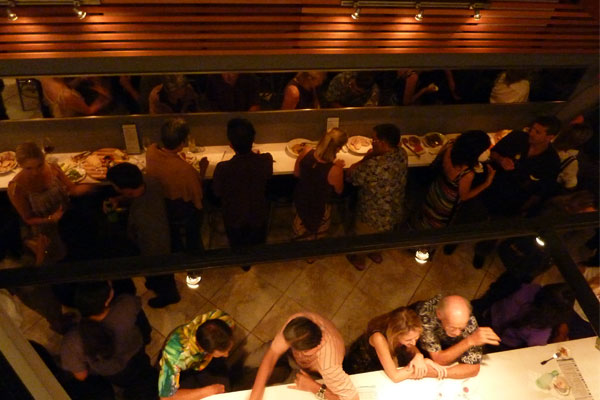 Today Salt Kitchen & Tasting Bar officially opens at 5pm. This is the first Honolulu opening I’ve looked forward to in a long time. Why? It’s a Kevin Hanney production, and he’s teamed up with Robert McGee, who came to Honolulu from Portland’s Slow Bar and opened the kitchen at apartm3nt. Hanney blazed a trail with 12th Avenue Grill in 2005, and he’s doing it again with Salt, around the corner from his flagship.
Postscript 6/25/11: The chef de cuisine is now Quinten Frye and 12th Avenue Grill sous chef Doug Kocol is charcuterie chef. Kocol has gained experience in the kitchens of Bouchon, Animal, and Michael Mina’s.

Even on a promo night, it’s clear Salt is an instant winnah. Hanney got everything just right for 12th Avenue Grill, when there was nothing like it on the island (Town was still a few months away), and he’s gotten it all right for Salt, taking over the bad luck space that was once C&C Pasta then two shortlived (because they were terrible) Italian joints, Buon Amici and Belladonna.

“I had the idea long ago—people would say to me, ‘What this neighborhood needs is a bar,'” says Hanney, who acknowledges that’s what’s missing from 12th Avenue Grill. “I saw an opportunity here and said, ‘Here we go.'” Salt isn’t the most original name—there seems to be one in just about every city, from Baltimore to Boulder (and I like the one in New York)—but it’s fine, and reflects a focal point of the kitchen—the art of preservation, in the form of curing and pickling.

I ran into chef Robert at the He‘eia Pier General Store + Deli reopening on May 16, and he divulged that in preparation for Salt’s opening, he had already butchered and cured five Shinsato Pig Farm animals, their meat transformed into things like lomo and guanciale. And on Friday they were thinly sliced and calling to me from a snow white plate. Hanney took me on a tour of the kitchen, which is spotless and orderly, but he divulged that “sometimes we have proscuitto hanging all over the place.” The walk-in fridge is filled with giant containers of house-made pickles (it pains me to admit that McGee’s bread-and-butter variety are better than those of my Grandma Griffith, who would make them from cucumbers she grew herself on my grandparent’s small farm in Washington State).

2 thoughts on “One more reason to go to Ka‘imuki: Salt”