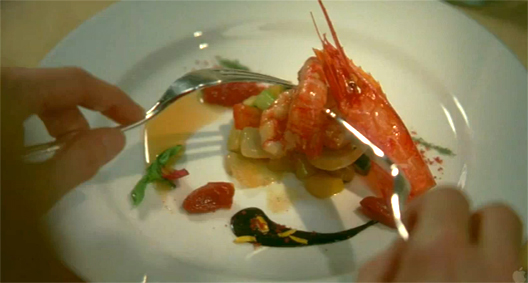 Food plays a key role in I Am Love, the quiet tour de force from Luca Guadagnino. When ruling-class Milan housewife Emma (an extraordinary Tilda Swinton, who learned Italian and Russian for the role) tastes chef Antonio’s food for the first time, it’s all over. Her life has changed. She falls in love. She falls in love with the first bite of his glistening, red prawn. And it is also food, a Russian fish soup called ukha, that gives the game away. Food is love. Food is betrayal.

Italophiles will also have plenty to ogle, from intimate scenes of Milan, where all buildings are like fortresses, and family dramas are played out behind grand gates, to street-lively San Remo. And the soundtrack by composer John Adams (Nixon in China, The Death of Klinghoffer) will sweep you away. Playing now at Kahala Theatre.

2 thoughts on “Food is love”