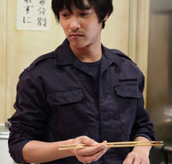 The Hawaii International Film Festival‘s Spring Showcase includes four films with an epicurean bent. They screen April 19-22. These films will inevitably make you hungry and thirsty, so for each film I’ve suggested somewhere to go to feed your needs.

Playing tomorrow is Cafe Seoul, which will have the K-Pop nuts out in force—Korean singer-actor John-Hoon is in it, along with Japanese model-actor heartthrob Saitoh Takumi. Disconnected brothers are reconnected through the family restaurant. If you like K-dramas, you will love this. Have it for lunch. Monday April 19 at 1:30pm.
For post-film craving: Choi’s Garden

The Japanese have a flair for fetishizing food within cute-heartwarmingly poignant films. The best of them all, of course, is Tampopo, because it had complex layers to its ramen obsession (and because a young Ken Watanabe is in it). No surprise that last year’s insanely popular Departures‘ key bonding scene involved the sharing of food. If you caught Udon at HIFF in 2007, don’t miss Chef of the South Polar. Another lighthearted comedy with food as the unifying force—this time set in Antarctica. The screenplay is based on Jun Nishimura’s book about his experience as a chef with Japan’s 38th Antarctic Exploration in 1997. No instant ramen here. In the film, the Nishimura character, played by Sato Sakai (above), painstakingly creates kaiseki-worthy meals for the motley crew in Japan’s Antarctic station. No culture can beat the Japanese when it comes to showing appreciation through the act of eating. The slurping, chomping and nom-nomming during the meal scenes are orchestrated to have you running to the nearest izakaya. Wed April 21 at 8:45pm, Thur Apr 22 at 3:30pm.
For post-film craving: Sushi Izakaya Gaku

Critics’ pick (uh, that would be me): “What kind of a *tool* do you have to be to live out in the desert and make wine?”—asks Eric of Adult Swim‘s Tim and Eric, in a faux talk show set up with Tool frontman Maynard James Keenan in Blood Into Wine. Find out in this documentary about Keenan’s horticultural feat of growing grapes in Arizona—and, with winemaker Eric Glomski, creating something that has wine experts raising their eyebrows (in a good way). He named one of his wines after his mother. It’s little bits of knowledge like that that will make this film appeal to people who screamed in Blaisdell Concert Hall in 2006 as Keenan humped his mike stand to his band’s deafening rock grind  (read Gary Chun’s article in the Star Bulletin). And the behind-the-scenes viticulture segments will appeal to people who like to sip their Cab to Chopin. Also appearing in the polished film: comedian Patton Oswalt, Primus drummer Tim Alexander and Milla Jovovich. In vino veritas. One screening only: Thu April 22 at 6pm.
For post-film craving: Vino

Critics’ pick: I saw Aasif Mandvi‘s hilarious one-man show Sakina’s Restaurant in New York back in 1998, which is why I can’t wait to see Today’s Special at HIFF (unfortunately there’s no trailer online!). Mandvi co-wrote and stars in this film about an Indian restaurant in Queens—and it’s based on that Off-Broadway piece. Jackson Diner anyone? Thurs April 22 at 8:30pm
For post-film craving: Bombay Restaurant

Never been to HIFF before? If you like movies, you should go. Most of the films you’ll never get another chance to see on the big screen, unless you fly to New York frequently. There are three ways to get tickets: at the box office—which is ACROSS THE STREET from Dole Theatre ($12), online ($1 extra), by phone ($2 extra). Sometimes at the box office you might be in a line with a clueless volunteer, or someone who hasn’t quite decided what she wants to see, or your pick might be sold out…it can be aggro. Yah, there’s no absolutely easy way, but it’s worth the effort.