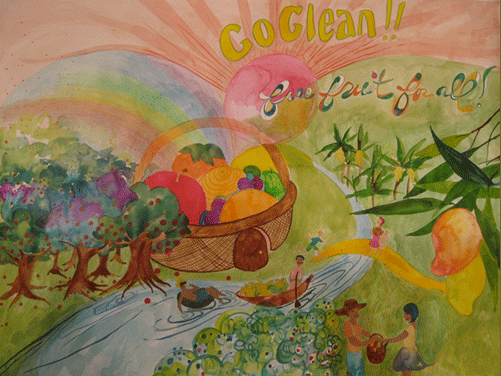 Two years ago, April Lee and Chetan Mangat were living in Honolulu and two experiences led them to create their new online produce exchange GoGlean.org. One night they saw Agnès Varda’s film The Gleaners and I (a look at harvesting—as former agrarian duty and modern urban survival). It also happened to be mango season. They saw the irony of $2 Costa Rican mangoes being sold in a town where yardfuls of fruit were rotting.

“There are so many mangoes going to waste,” said Lee by phone from Cambridge, where she is a student at Harvard’s Graduate School of Education. “Then you go to markets and you expect to see local produce and for whatever reason you see imported fruits. It makes sense to create an online forum managed by the public. You supply them with the tool to connect them with each other.”

The website is like a craigslist for fresh food. You open an account, and let people know what you have and where they can get it. Right now there are a couple of farmers on there, but a lot of the notices are for “found” fruit—people disclosing where the wild things are, such as “berries that look like blueberries” in Brooklyn’s McCarren Park, or strawberry guavas on the loop trail in Keaiwa Heiau State Park. I don’t know about you, but I don’t want an hour hike to turn into a fruitless search. That’s some lean gleaning. People also put out the word on more accessible pickins—April let people know about a treefull of “almost ripe pears spotted on the north/east side of the parking lot of Trader Joe’s in Cambridge.”

But as word spreads, site users may be finding themselves in situations more like the good ol’ days portrayed in Vargas’ documentary. “Chetan’s been talking with farmers in New York, and they’re keen on him going back to the original idea of connecting farmers with people,” said Lee. “If people can take farmers’ surplus it will be mutually beneficial for people and farmers, as farmers don’t have to then get rid of the leftovers.”

Lee and Mangat are the type of people who think nothing of cooking for hours for a houseful of people—some of whom they might not even know—and do it with genuine smiles. They offer GoGlean as a community service.

“We want people who want the food to get involved,” says Lee, no matter where they are. If you happen to be going to Brazil soon, through GoGlean, you know you can get free surplus seasonal fruits and vegetables from Fazenda Armengue in Trancoso, Bahia. Lee knew Fazenda Armengue owner Rich Rossmassler when he ran Geneva, New York-based Red Jacket Orchards’ greenmarket program in New York City.

Lee, originally from Honolulu, worked at the Honolulu Academy of Arts (where she was my colleague) as curator of special projects before moving to Los Angeles’ Hammer Museum for a stint as a curatorial assistant. In Cambridge she is also studying at MIT’s Media Laboratory. Mangat, who hails from India and makes his home in Brooklyn, founded Blank & Co., where his clients include the shop The Reed Space and Zing Magazine.

“We both are kind of involved in the possibilities of new media technology for community participation,” says Lee. Along with GoGlean, Mangat has also developed the project The Labelmakers, an online effort to “allow every citizen to be actively involved in how we label our foods.”