It’s not often that a new cooking talent comes to town (aside from the chefs at the battery of Japanese spots constantly opening), and boy have we received a big one. Last month the Halekulani had a press event in the kitchen of La Mer—a meet-n-taste with the hotel’s new executive chef Vikram Garg.

I thought: Didn’t I get a press release back in October announcing his appointment? During that time chef Garg has been getting settled, finding his sources, learning about the Hawai‘i culinary vernacular. And this little coming out party had everyone asking: When will new Garg menus be unveiled?

Garg has spent a lot of his career on the upscale-hotel circuit (the Oberoi Mumbai, Metropolitan Palace in Dubai, Rosewood Little Dix Bay in BVI), but he was also the opening chef at the lauded Washington, D.C. restaurant IndeBleu, where he mixed French cooking with Indian flavah.

While Garg has worked mostly in French restaurants, he’s from the Punjab, where he grew up in a vegetarian household. “My Mom was an excellent cook,” he said. And he has that innate Indian sense of spicing. Like a boy showing off his collection of Matchbox cars, he brought out containers of fenugreek, five kinds of pepper, black cardomum (“It’s the truffle of spices”) and other Spice Route delicacies for us to smell and taste. His gets his organic spices from India.

From the first amuse-bouche bites—like a ball of fresh watermelon accented with fresh basil, candied ginger, toasted cumin and smoked salt (I wished it was more than a bite)—to the meaty last courses, Garg made it clear that he brings a lot to Hawai‘i’s restaurant table. 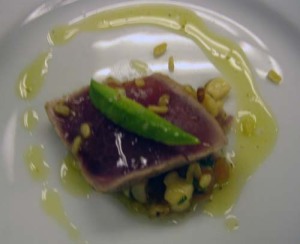 The menu read familiar—but was served in totally new ways. Garg reached back to Indian street food—grilled corn and lime—to wake up seared ‘ahi. He also added sliver of avocado for a “deconstructed guacamole.”

Next, for a “ceviche” he took lychee and scallops —”they have similar texture so I combined them and added kalamansi as a local touch.” But he didn’t just squirt some kalamansi juice on there. No. He filled a soda siphon with it along with chili and ginger to make a fizzy broth and squirted 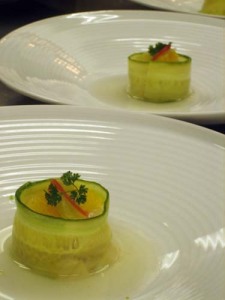 each plate. The silkiness of the shellfish and fruit combined with the citrusy effervescence—I hope this dish makes it onto a Halekulani menu—any menu.  Oh, and did I mention the ceviche is in a “cup” formed by a ribbon of cucumber? And then topped by poplotus (popped lotus seeds instead of corn kernels).

Even the old standby of asparagus and prosciutto is refreshed, with Spanish jamon iberico bellota (made from pigs that gobble up acorns in oak forests) and a cardamom-lemon curd that’s almost like lemon meringue pie filling.

Garg prepared foie gras three ways—as a meatball swaddled in duck confit (oh, yes), as a petite sandwich with rose petal marmalade, and as a filling in a chocolate cup made from North Shore chocolate and topped with beads of mango.

The day before the demo Garg came up with a play on lomilomi salmon. “I call it trade off,” said Garg. “Hawaiians traded produce for salmon.” He coated salmon filets in salt and green onion and let them sit for 27 hours. It will appear on the Orchids menu.

He also served an oversize panfried gnocchi with braised oxtail. What made the dish was liquid Parmesan infused with methi (fenugreek), its cheesy saltiness bringing the whole thing together.

Then there was “fish and chips”—a sort of tempura lobster at one end of a long rectangular white plate and a tangle of taro chips on the other, set off by a smear of kari leaf pesto. A perfect lamb chop came with a mojito reduction, which actually ends up tasting like a classic vinegary mint sauce.

While Garg judiciously uses Indian flavors, this by no means is fusion cooking. They are just little accents on French, American and other cuisines. He doesn’t do twists on Indian dishes à la Floyd Cardoz (with whom Garg is pals). But I sure do hope sometime in the future he does a special Indian dinner at the Halekulani.

Garg was already familiar with Hawai‘i’s growing designer produce biz. While at IndeBleu, Food + Wine magazine asked him back in 2005 to name his favorite mail-order source. His answer: “Hamakua Farms for fresh palm hearts from Hawaii.”

Where can you see Garg’s touch? He has already revamped the menus of Lewers Lounge and the House Without a Key (including the Tuesday and Thursday night barbecues).