It’s 2am and your insides feel like a flammable swamp. But  Zippy’s, Sorabol or Wailana Coffee Shop again? Gag me with a teriburger. Buffalo, NY, transplants Tomas Arana and Eric Richter created the new Buffalo Boys Hoagies with the inebriated in mind. Open until 3am, and strategically positioned near UH, the duo hope carousing bateaux ivre will float their way looking for booze-soaking magic.

Modeled after the Western New York regional mini-chain Jim’s Steakout, Buffalo Boys’ signature offering is the steak hoagie—a Bâle-baked baguette-style bun piled with sirloin steak that’s been chopped up while it sizzled on the grill, fried onions, melted American cheese and a “secret sauce.” (Look at Jim’s Steakout menu and you’ll see that they, too, have a secret sauce.) To tell you the truth, the sandwich

filling looked kind of like something that came out of a mama bird’s mouth and doesn’t have a lot of flavor (the sauce really is secret cause I couldn’t taste anything), but it has great texture. The mix of tender chopped beef with a soft bun coated with toasted crunch is pretty much irresistible, especially when your vision is kinda blurry and your body is suffering a deficiency of Vitamin G (for grease). I want to go back to try the “fire hoagie” spiced up with hot peppers. 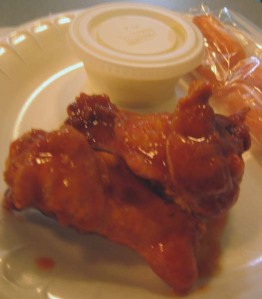 And of course there are Buffalo wings (and drumettes—isn’t that an adorable word?). And yes, they are probably the best Buffalo wings on the island. Made to order, they have a nice crunchy shell sealing in moist—dare I say juicy—little compartments of meat. If you order “hot” the whole limb is coated in the requisite Frank’s RedHot sauce, a condiment born in Louisiana but became the flavoring for the Super Bowl Sunday food of choice in New York. (According to food lore anyway.) They come with a little plastic tub of blue cheese dressing and a baggie of carrot sticks. Wings also come in medium, mild, plain and BBQ varieties. But hot is best. You can order a bucket o’ 50 for your next sports clustercoma in front of the ol’ flat screen. Inside scoop: If you want EXTRA HOT, ask, and they’ll cook up a batch made with fresh chiles from manager J Olson’s garden.

Richter and Arana gutted what was the horrible Bistro Sun (how did it last as long as it did?) to make an airy fast-food café space, with corrugated steel accents (like Hank’s Haute Dogs) for an industrial-cool vibe. Artist Michael Sweitzer, who works as instructor for the Honolulu Academy of Arts’ Art to Go program and as a server at 12th Avenue Grill, did the mural gracing a wall. The duo also recruited Town server Olson, who’s doing a good job getting the place to be consistent and customer-pleasing. On a visit there were a couple parties of pasty, plump over-50s originally from the mainland (I’m assuming) who seem to have built-in hoagie radars. They seemed very pleased. (PS. I love teriburgers. I like to get them at Sekiya’s, in case you thought I was hatin’ on simple local food. Wow, who knew Sekiya’s has a website! Town doesn’t even have a functioning website.)